FORMAL IMPEACHMENT INQUIRY CALLED IN US

House Speaker Nancy Pelosi has announced a formal impeachment inquiry into Donald Trump, by saying the U-S President must be held accountable for his actions. This follows reports that Trump may have wanted Ukraine’s help for his re-election bid by allegedly pressuring the government of Ukraine to look into Democratic presidential candidate Joe Biden and his son. Trump has taken to Twitter calling it a “total witch hunt … that the Democrats never even saw the transcript of the phone call with Ukraine’s president.” Trump has promised to release tomorrow the transcript of his phone call with Ukraine’s president Voldomyr Zelenskiy. Pelosi had long resisted pursuing impeachment, but her caucus moved swiftly in favour of a probe in recent days. The discussion between the two leaders came to light after a whistle blower released the information. 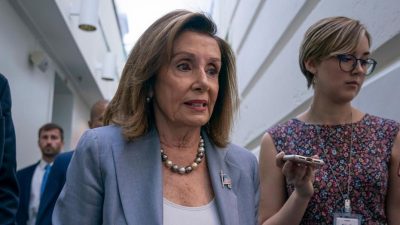