OHA SAY THIS WAS WORST JUNE ON RECORD FOR "HALLWAY MEDICINE" 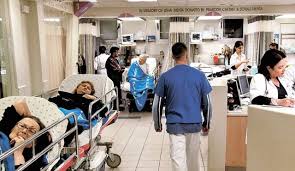 This June is going down as the worst on record for so-called “hallway medicine” dating back to 2008.

The Ontario Hospital Association tells the Toronto Star that the average wait time to be admitted to hospital from an ER was 16.3 hours.

OHA president Anthony Dale says the situation is worrisome given the flu season is around the corner.

He says some of the largest hospitals are facing serious financial challenges despite looking under every rock for more efficiencies and savings.

One of the biggest issues, according to the report, are ALC or “alternate level of care” patients.

The OHA says about 4,500 of them were occupying hospital beds during the month of June even though they no longer required hospital beds.

And while the Ford government has pledged more long-term care beds, transitional beds for people waiting for space and home care improvements, the OHA says there needs to be a bridge strategy until those solutions take hold.