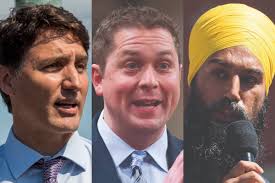 The annual Labour Day parade took place in downtown Toronto Monday morning as workers and unions marched from University and Queen to the CNE grounds.

The group was joined by NDP leader Jagmeet Singh who unveiled his party’s plan for workers.

The leader of the New Democrats says his party would bring in a $15 per hour minimum wage for workers in federally regulated sectors. Singh said he would also stop companies from brining in “scabs” or replacement workers when their staff goes on strike.

The Prime Minister issuing a statement saying “we celebrate the workers who have built our country and made workplaces from coast to coast to coast safer, more equitable, and more just.”

In his statement Conservative Leader Andrew Scheer said that Canadians continue to build on the legacy of sacrifice and hard work set by generations before them.

He went on to encourage all Canadians to celebrate the hard-workers in their lives.

He says it’s time to take that incentive away…by ensuring the companies that genuinely need a temporary worker…have to pay them the same pay and benefits as other workers.