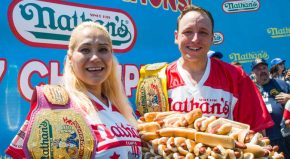 Eleven-time champion Joey Chestnut says he expects this year’s contest to be a real battle. He joined other competitors at the Empire State Building a day before the big chew for a weigh-in. Chestnut weighed in at 216.5 pounds while defending women’s champion Miki Sudo weighed 114 pounds. Chestnut ate 74 wieners and buns to claim last year’s title and Sudo ate 37 to win on the women’s side. The top five winners of each gender will split $40,000. The two first-place winners will each earn $10,000.