Charlie Chaplin, Lucille Ball, George Carlin and Dave Chappelle. Just a handful of the comedians featured at a new National Comedy Centre in Jamestown New York, that celebrates it’s 1st anniversary this summer. Just a four hour drive from Toronto, this comedy shrine is a first of its kind and it’s getting rave reviews. Executive Director Journey Gunderson told Mark Wigmore, host of The Oasis on The New Classical FM, visitors can customize the experience in this state of the art museum which also boasts a large collection of artifacts like Charlie Chaplin’s cane. The $50 million complex is located in Lucille Ball’s hometown and gives fans an unprecedented behind-the-scenes look at the art of comedy. For more information, visit 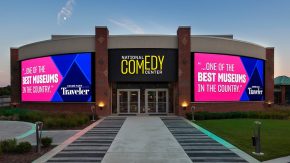