TORONTO RAPTORS PLAN TO VISIT OTTAWA BUT WHAT ABOUT WASHINGTON ?

Will the Toronto Raptors be heading to the White House? They’re definitely planning a visit to Ottawa as plans are underway for the team to meet Justin Trudeau in the Nation’s Capital but the date is still being worked out. 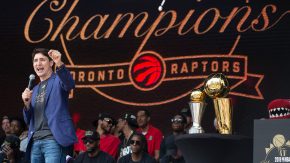 The Raps are the first team outside the U-S to win the title and President Trump was non committal when asked if he’ll invite the Raptors to Washington saying “if they’d like to do it, we’ll think about it”. It is a tradition for the N-B-A winners to visit the White House but during Trump’s tenure, the Golden State Warriors didn’t go, despite winning in 2017 and 2018. Meantime, the Raptors will pick 59th in Thursday’s N-B-A draft and Canadians could make history. Mississauga’s R.J Barrett is expected to be chosen third by the New York Knicks and there are a number of other Canadians who could get drafted.