On the same day Toronto city staff released a report on Vision Zero, a female pedestrian has been struck and killed at Regent Park and Dundas and another person was injured. The driver fled the scene but was captured by police soon after and charged with impaired. 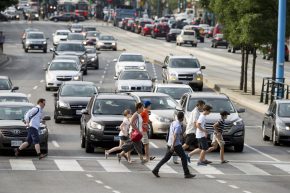 Meantime, Mayor John Tory says the city staff report to reduce pedestrian deaths recommends slower speed limits on arterial roads where 83 percent of all pedestrian fatalities and serious injuries happen. The report also recommends adding more mid block crossings in Scarborough, which has a higher number of fatalities. The findings will be presented to city council next week.