As expected the Liberal government has given the Trans Mountain pipeline expansion a second lease on life. The long-awaited decision to approve the contentious project comes nine months after the court ripped up the original federal approval, saying there wasn’t enough consultations with Indigenous groups. The Prime Minister said his government listened and that he’s sympathetic to concerns about the environment but that Canada needs to take advantage of its natural resources while they’re still needed. The government says shovels will be in the ground this construction season but no date has been given. Trans Mountain Canada will have to apply a second time for all the necessary federal, provincial and municipal permits before breaking ground. The government says the profits will go toward green energy projects. 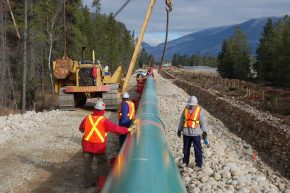 NEW MATERIAL ON THE WAY FROM "THE SHAT"