HEIRESS , DESIGNER AND ARTIST DIES AT 95

C-N-N anchor Anderson Cooper has announced the death of his mother Gloria Vanderbilt. 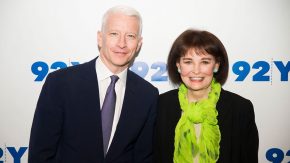 The great-great-granddaughter of tycoon Cornelius Vanderbilt was dubbed the poor little rich girl following a scandalous custody battle in the 1930s. She went on to become a queen of designer jeans in the 1970s and `80s. Cooper spoke about his famed mother in a 2017 interview, saying no one takes on life like Gloria Vanderbilt. Vanderbilt was 95 and had been suffering from advanced stomach cancer.