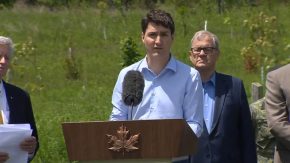 Justin Trudeau took part in a tree planting ceremony in Whitby east of Toronto as part of a campaign to remember Canada’s fallen soldiers. The Prime Minister and others planted seedlings along the Highway of Heroes, a stretch of the 401 that’s become a memorial for deceased soldiers coming home. The initiative calls for two-million trees to be planted on the 401 between Trenton and Toronto to help the environment and beautify North America’s most-travelled highway. Trudeau says the federal government is proud to support the campaign because recognizing the courage and sacrifice of Canada’s service men and women should not just happen when a big milestone comes around. 117-thousand men and women lost their lives by fighting for Canada