RAPTORS STEP IN THE GLOBAL SPOTLIGHT

There’s no doubt the Toronto Raptors are finding their groove on  the court but they’re also giving the city a boost. Tourism Toronto says the team’s deep run into the NBA playoffs will have a positive long-term effect. Executive Vice President Andrew Weir says interest generated by team’s success and the exposure on national TV in the United States, can only help attract travellers. The Raptors have a 3-2 lead over the Milwaukee Bucks and are set to play Game 6 in Toronto Saturday night. A win means Toronto would make its first ever NBA finals appearance.

And Toronto’s Mayor John Tory is weighing in on the series defending the actions of the city’s ambassador, rapper Drake. He posted this cheeky tweet saying the  fact the Drake is aggravating the people of Milwaukee, makes the Mayor happy because it means he doesn’t have to do it. 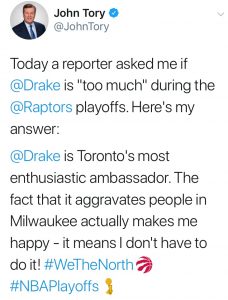 And the Raptors success has been extra special for one person. John Bitove, one of  founding owners of the team, says he feels like a proud parent as the Raps prepare for their biggest game in the history of its franchise. Bitove says he knew basketball would never replace hockey as Canada’s favourite sports but the Raptors have helped grow the sport across the country.