Nearly $1 billion has poured in from worshippers and high-powered business leaders to restore Notre Dame Cathedral in Paris after Monday’s massive fire. 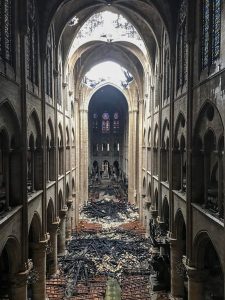 Rector Bishop Patrick Chauvet says he will close the church for 5 to 6 years. Merchants on the island where the Cathedral stands are worried about its stability, and their own futures. It’s one of the most-visited places in all of France and remains shut down. The neighbourhood economy depends heavily on tourism and the president of the merchants association says employees fear for the future. Johann Vexo, an organist at Notre-Dame, says he hopes he’ll be able to play in the historic space again soon. Meantime, the French Prime Minister emerged from a special Cabinet meeting focusing on the reconstruction of the cathedral to announce an international architects’ competition to rebuild the spire. It will also let citizens get special tax cuts if they make a donation.