“She is not content with being a role model, she’s determined to be a model,” quipped  Zoomer Media founder Moses Znaimer during his introduction of 98-year-old ‘Hurricane’ Hazel McCallion who becomes the oldest person featured on the cover of Zoomer Magazine. 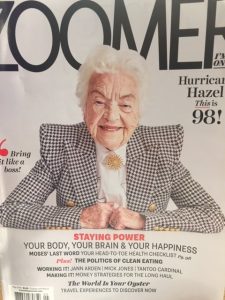 The legendary municipal politician, who’s still in robust health, rocks an expensive Balmain designer jacket on the cover but drew laughter when she told the crowd gathered at the cover reveal event that she normally shops at Walmart and occasionally Hudson’s Bay. Her favourite photo among the spread is captioned “Hurricane Hazel.” She’s fierce-looking in a leather bomber jacket, flowing scarf and goggles. Hazel is busier now than ever serving on several boards and is chief elder officer visiting seniors homes. She proudly reveals she still has all the organs she was born with has only been to hospital a handful of times to deliver her 3 children and in 2003 when she was hit by a pick up truck, although she fought to stay out of hospital. The soon-to-be centenarian says her most productive days are still ahead. Listen to my report here.