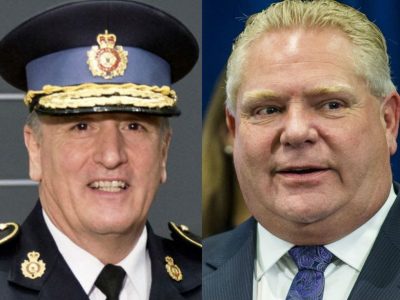 Blair filed the $5-million lawsuit over comments by the premier that Blair violated the Police Services Act. Ford’s comments came after Blair asked the courts to force the provincial ombudsman to investigate the appointment of Doug Ford’s long-time friend, Ron Taverner, as OPP commissioner, raising concerns about political interference.The government has said that the decision to fire Blair came from the public service because Blair released confidential OPP information in court. Blair’s lawyer says his client has never received notice of a complaint under the Police Services Act let alone any findings that he violated it and he alleges that the premier’s words would lead an average person to believe Blair is someone who breaks the law. A spokesman for Ford says the premier will be responding to the lawsuit through his legal counsel. York deputy police chief Thomas Carrique takes over as commissioner next month.