FORMER FIRST LADY NOT A FAN OF DONALD TRUMP 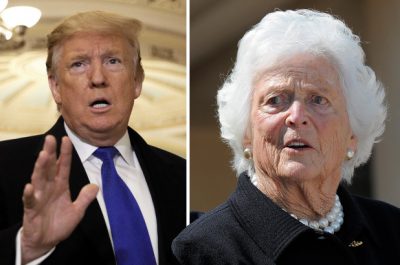 Barbara Bush says Donald Trump caused her “angst” during the 20 16 election and made her question whether she was still a Republican in the months before she died. The late former first lady’s thoughts about Trump were revealed in excerpts from an upcoming biography “The Matriarch.” In a February 2018 interview, Bush was asked if she still considered herself a Republican..and replied,  “I’d probably say ‘no’ today.” She died in April at age 92. A friend gave Bush a clock that counted down the time remaining in Trump’s first term that she kept at her bedside.