SOME CANADA POST WORKERS ARE WALKING TODAY...OFF THE JOB

Four cities are strike-bound when it comes to mail delivery today. The union representing 50,000 Canada Post employees launched rotating strikes after midnight this morning in Halifax; Windsor, Edmonton and Victoria. The union says mail will still be delivered in those cities over the 24-hour strike, but will be delayed. Job security, forced overtime, and health and safety demands remain key issues. No word yet if the rotating strike will hit Toronto, and local Toronto CUP-W president Megan Whitfield says the big stumbling block for workers in the GTA is increased workload. Canada Post says its last offer was fair but the union argues that issues like job security and forced overtime remain unresolved. 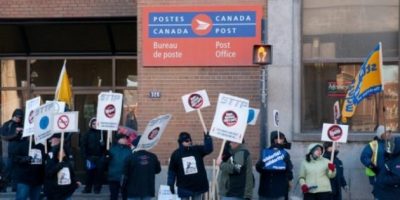