DOUG FORD'S POPULARITY HAS GONE UP SINCE ELECTION 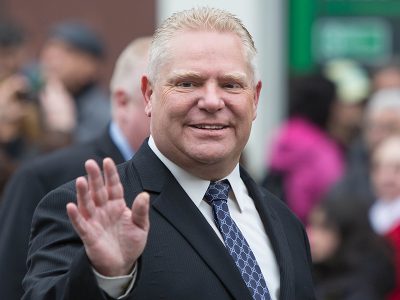 A new poll shows Premier Doug Ford’s popularity has gone up, possibly due to his decision to cut Toronto City Council.

The DART Insight poll shows that 63% of those polled, very much or somewhat, believe that Toronto City councillors can handle the larger wards.

61% think Premier Ford’s move will save millions of dollars and 58% agree that council will be more effective because it has been downsized.

CEO of DART Insight and Communications, John Wright, says what is especially interesting is that when the provincial election took place Ford received 33 percent of the vote but now 41% say he is doing a good job.

“We’re past the sound and fury and we find it’s now acceptable by a majority of people,” Wright told the Toronto Sun.  “What is interesting to me is Ford’s numbers…when the election took place he got 33% of the vote in Toronto, and now we have 41% saying he’s done a good job.  So that’s nine points up.”