A 79-year-old Toronto grandmother stood among other graduates at York University’s convocation yesterday. Osra Lindo graduated with a degree in gender and women’s studies. It was her first degree and admits it was by no means easy keeping up with technology for some her online courses, and surrounded by much younger peers. There were also a few generational adjustments like the use of the F word. Lindo says older people use the expression was Oh My, while her younger friends at school often say “F it.” Lindo made some new friends at University and joked she’s the youngest at heart, but oldest in age. Up next, she wants to learn to play piano, study Japanese and French. 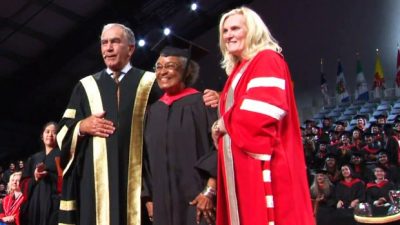