MZTV MUSEUM HIGHLIGHTS THE MOST FAMOUS PERSON NOBODY EVER HEARD OF 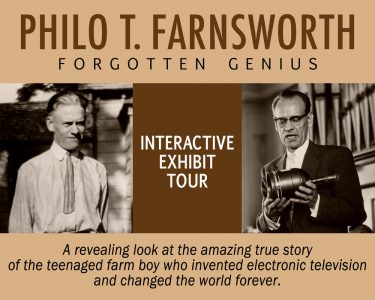 Almost 100 years ago, a 14-year-old came up with an invention that would transform our lives. Philo T. Farnsworth conceived the idea for electronic television and now his story is being told through a new exhibit at the ZoomerPlex at the M-Z-T-V museum of Television and Archive. Exhibit curator Phil Savenick says Farnsworth made the groundbreaking discovery while plowing potato fields back in 1922, before he attended high school. Farnsworth has been called the most famous person nobody ever heard of and he appeared on the 1950’s TV game show “I’ve Got A Secret” where celebrities try to guess the profession of the secret guests. Watch here Be the first to see this exhibit called “Forgotten Genius: The Boy who Invented Electronic TV” this Saturday October 13th at the M-Z-T-V Museum at the Zoomerplex in Liberty Village from 11 a.m. until 4 p.m. For more information visit MZTV DOT COM.