The U-S and Mexico have reached what Donald Trump calls a bilateral trade understanding. It could lead to an overhaul of the three-country trade deal. The U-S president briefly threatened again to put tariffs on Canadian autos and auto parts, then said he was willing to give Canada a chance adding he plans to call Prime Minister Justin Trudeau soon. Trump said Canada can either make a separate deal with the U-S or be folded into the arrangement just made with Mexico. Mexican President Enrique Pena Nieto spoke with Trump via speaker phone today repeating several times that he hopes Canada will be part of an eventual trilateral agreement. Justin Trudeau has insisted his government will only sign a deal that’s good for Canada. Trump issued a veiled threat, saying one way or the other, we will have a deal with Canada … either a tariff on cars, or a new negotiated deal but added that a tariff is the easier way to go. Speaking through an interpreter by conference call, Mexican President Enrique Pena Nieto said several times that he hoped Canada would be part of an eventual trilateral agreement. Trump also wants to re-baptize the trade agreement with Mexico. He’s calling it the United States-Mexico trade agreement. Trump says NAFTA has a lot of bad connotations for the United States because it was a rip off. 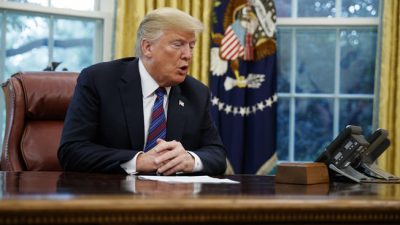