TALKS BREAK OFF BETWEEN CNE BOARD AND STAGEHANDS

There’s  been a MAJOR setback between striking CNE stagehands and the exhibition place board of governors. 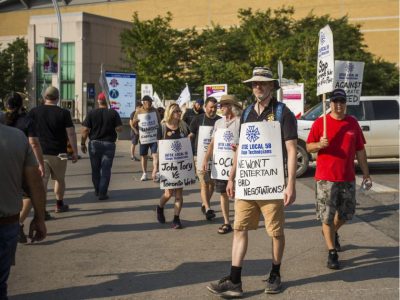 Following a tense 12-hour meeting between the two sides with a mediator, the union says the city walked away from the table. Workers with  International Alliance of Theatrical Stage Employees Local 58, have been locked out since mid July after they were unable to reach a deal with the board. The union says the main stumbling block is a demand by the board to contract out work. Both sides were scheduled to meet again Sunday but the union says that’s now in jeopardy.  Local 58 union president Justin Antheunis says the ex place board of governors isn’t interested in reaching a deal and only returned to the table as lip service to city council…who ordered the two sides back to the table. Negotiations resumed Friday just days after the head of the CNE sent a letter to Toronto city council saying the labour dispute could cost the annual fair more than $1.5 million.