Ontario’s legislature will reconvene Friday as the government makes another attempt to introduce back-to-work legislation to end a nearly five-week strike by college faculty. 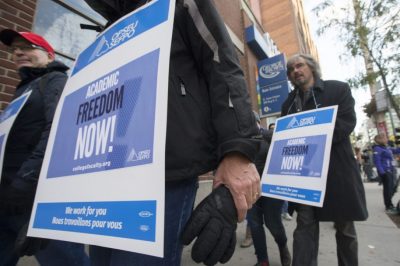 The New Democrats blocked the Liberals attempt to table the bill Thursday evening. Leader Andrea Horwath says the the legislation would likely pass by the end of the weekend and the Liberals promise to sit through the weekend to pass the bill. Premier Kathleen Wynne said in a statement that students have been in the middle of the strike for too long and it’s time to get them back into their classrooms. New Democrat House leader Gilles Bisson brushed aside the criticism that his government is not putting students’ interest first saying the government has done little in the past five weeks to end the strike. About half a million students have been out of class since thousands of college professors, counsellors and librarians walked off the job last month.The teachers will not be picketing Friday and the union says students can expect the labour disruption will mean a 2 to 3 week delay in their current semester. OPSEU says College’s bargaining team should step down, for presenting misleading facts about the contract offer which its members voted overwhelmingly to reject.