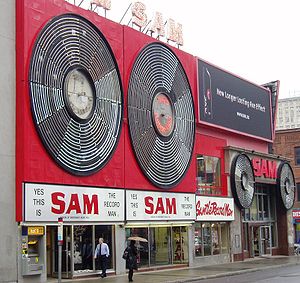 Work has begun to restore the giant neon Sam the Record Man sign that once drew people to Toronto’s landmark music store downtown. The giant two enormous spinning discs on a red background used to be a familiar sight near Yonge and Dundas. Toronto’s Ryerson University acquired the sign when it bought the store’s property in 2008, a year after the business closed. Ryerson initially said it planned to showcase the sign on a new building on the site but decided later to install the sign two blocks away, overlooking Yonge and Dundas square. The iconic sign is expected to go up at the new site in the fall. A ceremony is being planned when the nearly 50-year-old sign shines again.