A New Brunswick veterans’ group is upset with the Royal Canadian Mint over a Second World War commemorative coin. Keith Brewer, executive director for the Dieppe Military Veterans’ Association, says the Mint should have printed the word raid, not battle, on the new Dieppe Coin. The Royal Canadian Mint says it understands the veterans’ concerns and apologizes if the name offended anyone.
The current coin will continue to be sold for $93 as part of the mint’s Second World War battlefront series, but a new Dieppe Raid coin will be issued next year. A spokesman for the mint says the Crown corporation consulted with the Department of National Defence before proceeding with the coin. The silver collector coin was issued for the 75th anniversary of the assault. 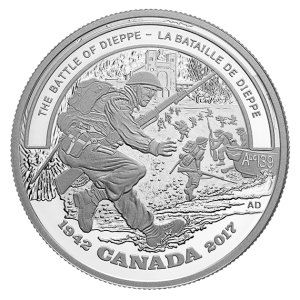