U-S President Donald Trump is in Saudi Arabia, kicking off his first official foreign trip. Trump was awarded the country’s highest civilian honour — the Collar of Abdulaziz Al Saud. The president left a swirling storm of new reports in the U-S media, including remarks he made to Russia’s foreign minister about the firing of former F-B-I Director James Comey. And the Senate Intelligence Committee has announced that James Comey has agreed to testify at an open hearing. As Air Force One landed Saturday in Saudi Arabia, social media was abuzz as First Lady Melania Trump chose not to wear a headscarf while disembarking. Donald Trump criticized former first lady Michelle Obama for not wearing a headscarf during a January 2015 visit to the nation with then-President Barack Obama. 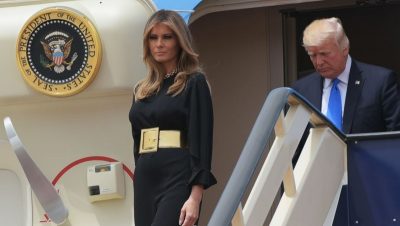