An off duty police officer assassinated Russia’s ambassador to Turkey at an art exhibit in Ankara. The gunman shouted “Do not forget Aleppo!” as he fired. The ambassador, Andrei Karlov, was several minutes into a speech at the embassy-sponsored exhibition in the capital, when the man wearing a suit and tie shouted “Allahu Akbar” and fired at least eight shots, according to an AP photographer in the audience. The attacker also said some words in Russian and smashed several of the photos hung for the exhibition. Russian Foreign Ministry spokeswoman Maria Zakharova said in a televised statement that the ministry would soon comment on “the attack on the Russian ambassador in Turkey”. 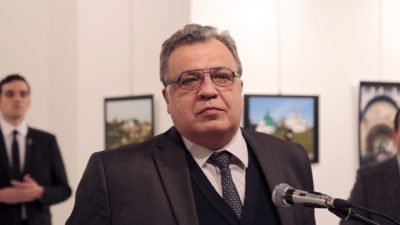