It was a who’s who of Canadian stars today at Canada’s Walk of Fame induction ceremony in Toronto. Six homegrown stars from the worlds of sports, stage and screen received their stars at a ceremony at the Allstream Centre. The late stage and screen icon Al Waxman is among the honourees. Joining Waxman is NHL Hall of Famer Darryl Sittler, who played with the Toronto Maple Leafs, Philadelphia Flyers and Detroit Red Wings. Award-winning singer-songwriter Corey Hart, actor-director Jason Priestley, filmmaker Deepa Mehta and veteran fashion entrepreneur and journalist Jeanne Beker are also being honoured. Country star Brett Kissel will be the recipient of the Allan Slaight Honour, which is presented annually to a young Canadian making a positive impact in the music industry. Today’s red carpet event and ceremony will be televised on December 18. 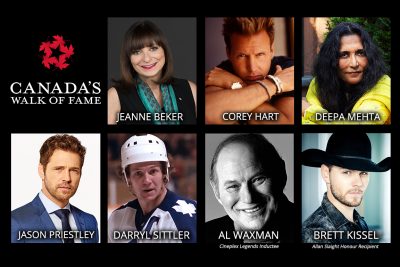