An alleged drunk driver has taken the lives of two 19 year old men who were walking on the sidewalk at Markham Road and Progress Avenue in Scarborough Sunday evening at 6:30 when they were hit by a vehicle.

Another 19 year old man who was with them was taken to hospital with serious injuries but is expected to survive.

Toronto Police Duty Inspector Stacy Davis says the vehicle was travelling at a high rate of speed along Progress when the driver lost control of the vehicle. 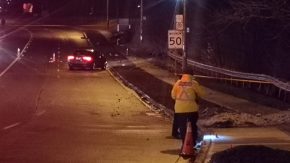 “The information that I have is that he struck the curb right here behind me near the bus stop,” Davis explained at the scene, “and that’s when he lost control and he did mount the curb and it does appear that he struck the guide rail also on the south side here and drove up the sidewalk and hit the pedestrians on the sidewalk.”

These pedestrian deaths bring to forty the number of people killed so far this year on Toronto streets.

There were other collisions Sunday involving pedestrians here in Toronto. An individual was taken to hospital after being hit near Finch and Weston.

An elderly man on a scooter was injured when he was hit by a street car.

It’s been nearly 2 years since Vision Zero was launched in Toronto, with little success at reducing the number of pedestrian collisions and fatalities.

People who are 55 and older are more likely to die of their injuries when hit by a vehicle.