Felicity Huffman was teary-eyed as she apologized to her daughter in a U.S. federal court in Boston at the sentencing hearing for her role in the college admissions bribery scandal. 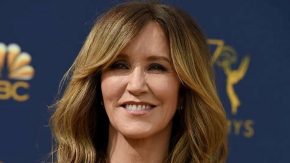 The “Desperate Housewives” star was then sentenced to two-weeks in prison.

Back in April, Huffman agreed to guilty plea on one count of conspiracy to commit mail fraud and honest services mail fraud.

Huffman was one of a number of names caught up in the scandal, where she paid a consultant $15,000 to help inflate her daughter’s SAT score.