ANOTHER QUESTIONABLE HIRE AT QUEENS PARK

Following a patronage appointment scandal that’s forced the Premier to rescind new positions of three people with ties to his former Chief of staff, comes word that the father of a conservative MPP got a government job. 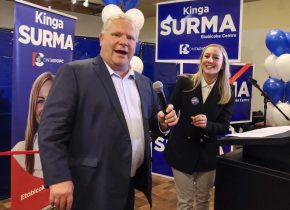 Miroslaw Surma, father of Conservative Kinga Surma was hired just weeks after the 2018 election as a policy adviser for the Minister of Economic Development. The opposition parties are demanding a review, with New Democrat Marit Styles calling it a “cronyism scandal.” But Education Minister Stephen Lecce is defending the hiring of Surma. “Don’t prejudice people with real life experience, give them a chance,” Lecee told reporters. Regarding the issue of the previous appointments, Lecce said the Premier had no knowledge that they were relatives or friends of Dean French, his former chief of staff who has resigned.