Tomorrow, he’ll venture back to his earthly domain.

St. Jacques will load into a Russian Soyuz capsule tomorrow with a Russian and an American for their return to earth. He celebrated a milestone on his six-month stay on the ISS. St. Jacques celebrated his 49th birthday in January. 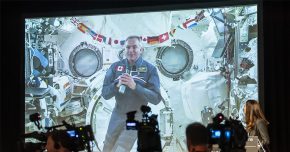 “What I’ve really been trying to do is soak it all in the last few days,” St. Jacques said in a press conference last week while floating inside the ISS. “The day I go back to earth, I will have to pinch myself. I think it will all feel like a dream.”

After months floating in weightlessness in orbit, the Canadian astronaut’s body will have some adapting to do. His body will have undoubtedly would have lost muscle and bone mass.

“It’s been six months without gravity where I learned how to fly and move in any direction. That’s because I lost my sense of equilibrium,” said St. Jacques. “When I get back to earth, I don’t think gravity will be my friend. I think I’m going to need to hold onto someone to keep myself upright.”