There is no way anyone could actually be James Bond. But, if your pockets are deep enough, you could may be able to drive like 007. 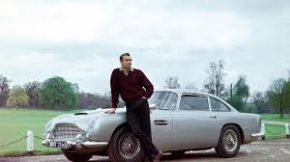 Sotheby’s, the official auction house of Aston Martin, has announced that the most famous car in the world and perhaps the most iconic Aston Martin of all time is going to auction August 15th.

This particular 1965 Aston Martin DB5 is one of just three surviving examples. It was commissioned by Eon Productions and fitted with MI6 Q Branch specifications for the 1964 Bond film “Goldfinger.”