It’s a special time to remember the 6-million Jewish lives lost in the Holocaust and stand up against the rising tide of anti-semitism and hate around the world.

Friends of Simon Wiesenthal Centre will be joined by faith leaders from across Toronto in recognition of Holocaust Remembrance Day Thursday evening at Mel Lastman Square starting at 6:30.

“We all have a duty to stand against such despicable acts of violence and anti-semitism wherever they are found, and let love and compassion guide our actions,” Trudeau told the gathering,”But we must also act and make it clear that we cannot and will not tolerate this any longer.” 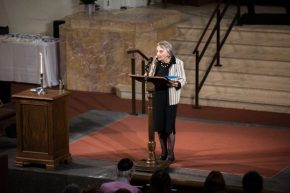 (Holocaust survivor Fay Kieffer, seen at Toronto’s Holy Blossom Temple on Wednesday, May 1, 2019, came to Canada with her mother as part of the Tailor Project.
CHRIS DONOVAN/THE GLOBE AND MAIL)

As part of the event, survivors of the Holocaust told their stories of horror from World War 2. It was the first time. Holocaust survivors and families linked to the Tailor Project and their descendants were assembled to celebrate the lives they’ve built in Canada.

Officially known as the “garment workers scheme”, the Tailor Project was led by Toronto based Jewish businessman Max Enkin in 1948.

More than 2500 people were brought to Canada, and more than half of them were Jewish. It was an historic feat because discriminatory immigration policy was a barrier for Jews looking to enter Canada at that time.