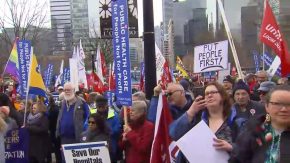 Thousands of people have gathered on the lawn at Queen’s Park to protest proposed cuts to public health throughout the province.

In Toronto, city officials are saying the cuts will equate to $1-billion in cuts over ten years. For this year alone, cuts mean a $65-million cut in the city’s budget.

Toronto Mayor John Tory says Toronto is being unfairly singled out by the government.

“The cutbacks are bigger,” Tory told Zoomer Radio’s “Fight Back with Libby Znaimer.”

“They deliberately made the cutbacks millions more in Toronto than in any other city. I certainly don’t understand the reasoning behind that.”

The proposed changes would see funding for public health return to a 50/50 funding split between the provincial and municipal governments. That’s down from 70/30, as it stands now.

Servant of the People: Season 2 - Episode 24