Easter Services were meant to be a celebration for Toronto’s Christians. But they took a more sombre tone upon hearing the news of the attack on churches and hotels in Sri Lanka.

After service at the Cathedral of St. Michael in Toronto, Cardinal Thomas Collins paid tribute to the Faith of those killed in today’s attack. 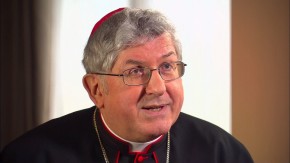 “All over the world, Christians come together to celebrate Easter mass,” Collins told the media outside the Cathedral. “This day is a day of great tragedy as our brothers and sisters in Christ in Sri Lanka have been killed, murdered on this most holy day as they came together in the worship of the Lord.”

At least 207 people were killed in the attack that appeared co-ordinated. Local authorities are blaming religious extremists. Nobody has taken responsibility for the attack.

Collins offered prayers to the victims.

“For those who have died, eternal rest granted to them and let perpetual light shine upon them.”

Servant of the People: Season 2 - Episode 24