The George and Barbara Bush Foundation has asked that an Air Force One plane set for retirement in 2025 be permanently exhibited at the late president’s museum at Texas A & M University. If approved, the Boeing aircraft would be on permanent loan to the George H.W. Bush Presidential Library and Museum from the U.S. Air Force. 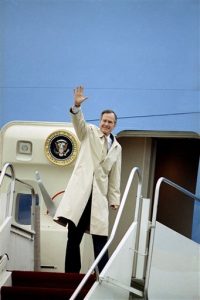 Bush died last November at the age of 94. A Foundation spokesperson says Bush loved the plane and that he was the first U.S. president to fly in it in 1990.Once declassified, the plane could be on show at the museum as soon as 2026. The foundation hopes the storied aircraft will attract more visitors and increase public knowledge of the Bushes’ life and legacy. Artifacts at the library and museum already cover Bush’s four years as president and major events.