Karl Lagerfeld has died in Paris at the age of 85. 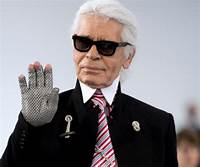 The fashion designer was rushed to hospital last night, according to publication Paris Match and died early this morning.

He had been head of fashion house Chanel since 1983.

The designer was thought to have been working right up until his death, even directing and passing on instructions to his team about the Fendi autumn/winter 2019 collection which is due to be shown at Milan Fashion Week on Thursday.

Concern about Lagerfeld’s health mounted after he missed his end-of-show-bow during the Chanel show at Paris Fashion Week in January.