Fifteen years ago, a couple of witches-to-be took over Broadway. 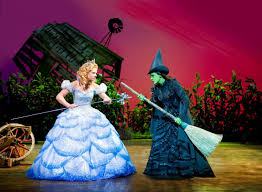 The musical Wicked roared into Broadway history and next Monday will celebrate its coming-of-age with a Halloween-themed TV  special. “Wicked is Broadway’s 6th longest running show and is regularly sold out, last week commanding a $120 dollars for an average ticket.There is currently a North American tour, a West End production and another touring the United Kingdom. It comes to Toronto’s  Ed Mirvish Theatre next June.