With the alarming number of traffic deaths in Toronto this year, a coalition of advocates is hoping to make road safety a major issue in this fall’s municipal election.

Toronto Mayor John Tory announced the Vision Zero Road Safety program just over two years ago, and since then, the number of pedestrian and cyclist deaths has not gone down. In fact, the numbers are higher this year than at the same time in both 2017 and 2016.

A report to be released by advocates Tuesday at Toronto City Hall sets out 15 recommendations they say mayoral and council candidates should adopt to protect pedestrians and cyclists.

The so-called “priority actions” range form proposals to accelerate policies councillors have already approved, to more controversial ideas such as banning right turns on red lights and lowering the default speed limit for city streets from 50 km/h to 40 km/h. 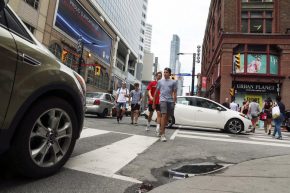 The report points out that 13 percent of all pedestrian injuries or deaths are a result of right-turning vehicles at intersections. (ANDREW FRANCIS WALLACE / TORONTO STAR)

The coalition is planning to send questionnaires to municipal candidates asking which of the 15 proposals they support and then publish the results before the October 22nd election.