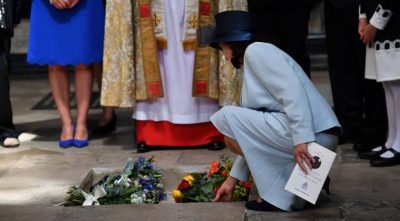 Stephen Hawking has taken his place among Britain’s greatest scientists – with the burial of his ashes in Westminster Abbey – between the graves of Charles Darwin and Isaac Newton.

More than one-thousand people attended a service of thanksgiving for the physicist today.

He died in March at age 76 – after decades of living with motor neuron disease.

The service included readings by actor Benedict Cumberbatch – who played Hawking in a B-B-C drama.

Hawking’s words, set to music by Greek composer Vangelis – are to be beamed into space from a European Space Agency satellite dish in Spain.

The ashes were interred in Scientists’ Corner, a section of the Abbey dedicated to those who have made significant breakthroughs – and a memorial stone will be placed atop the burial spot with the inscription; “Here lies what was mortal of Stephen Hawking 1942 – 2018.”  The stone is also inscribed with one of Hawking’s most famed equations.

Guests at the service included a thousand members of the public selected by ballot. A private funeral service was held in Cambridge in March.