WYNNE'S THRONE SPEECH TO OUTLINE GOVERNMENT'S PRIORITIES, WITH LIBERALS THIRD IN THE POLLS

Ontario Premier Kathleen Wynne says today’s throne speech is the only way to outline the government’s priorities ahead of the upcoming provincial election. 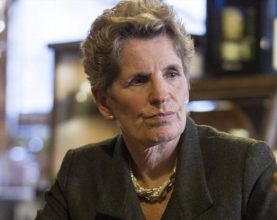 “I believe that solving problems that people are confronting in their day to day lives, and at the same time, acting responsibly in terms of the government of this province, that’s the work that we’re doing and will continue to do,” Wynne explained.

Wynne prorogued the legislature last week ahead of Monday’s noon throne speech to be delivered by Lieutenant Governor Elizabeth Dowdeswell.

Both opposition leaders have been critical of Wynne’s decision for a throne speech. NDP Leader Andrea Horwath calls it a stunt and Progressive Conservative Leader Doug Ford says there is no reset button for what he calls “15 years of Liberal waste and political corruption.”

The throne speech comes a week before the Liberals are set to table their 2018 budget, which is expected to include a deficit of about $8-billion, which the Liberals say is necessary to beef up spending on health care, child care and support for students.

The Liberals are third place in the polls with the election two and a half months out. The latest Forum Research poll gives Doug Ford and the Progressive Conservatives a majority, with the NDP forming the official opposition.