Millions of Canadians are expected to stop for a moment Sunday to remember those lost during the Battle of Vimy Ridge. The fierce battle in First World War France exactly 100 years ago has become a symbol of the birth of a nation. Toronto businessman Drew Hamblin grew up listening to his grandfather tell stories about fighting at Vimy. He’s back in France this weekend, for the fifth time, to pay tribute. For many, Vimy represents Canada’s transformation from a British colony to a country confident of its place in the world and worthy of others’ respect. Governor General David Johnston says the way the battle was fought, with commanders trusting their troops and thinking about warfare differently, is reflective of what sets Canada apart today. Prime Minister Justin Trudeau and other dignitaries are in France, as they take part in what will be a sombre ceremony. 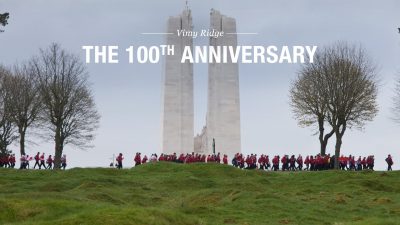 A number of events are planned at Fort York in Toronto to mark the historic battle. All events are free and open to the public from 10 a.m. to 5 p.m. Saturday and Sunday.