Did she or didn’t she not actively participate in the decision to release a new book? The question continues to swirl with the news, that a sort-of sequel to Harper Lee’s 1960 blockbuster ‘To Kill a Mockingbird” is going to be published this summer. 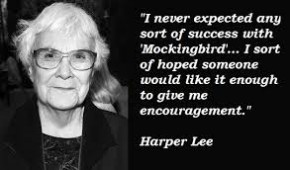 The reclusive and ailing 88 year old author is known to have wanted to be left alone, with “Mockingbird” her lone literary accomplishment.  Lee’s publisher, HarperCollins is saying only that Lee is “happy as hell” that her new book, “Go Set a Watchman” is already No. 1 on Amazon, even though it won’t be published until July.  “Watchman” was actually written before “Mockingbird” in the 1950’s,