It’s been nearly 60 years since Marilyn Bell completed her historic swim across Lake Ontario.  Since becoming the first person to make the cross, many others have attempted the same feat; some successful, others not. 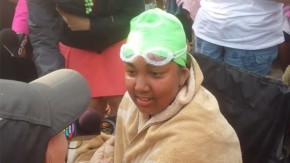 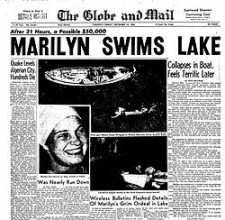 Last night, 14 year old Trinity Arsenault followed in the path of Marilyn Bell and became the youngest person to complete the epic 52 kilometre swim.  She did it in less than 24 hours.  Marilyn Bell’s time at the age of 16 was just under 21 hours.  The St. Catherines teen entered the water at Queen’s Royal Park in Niagara-on-the-Lake at 6:45 p.m. Sunday.  She reached her final destination, near what’s now Marilyn Bell Park in Toronto, shortly after 6 p.m. yesterday.  Arsenault said afterward it was her mother who accompanied her in a boat and helped her get through.  Her mother Christine did the same swim herself in 2011 but said her accomplishment was “nothing like what her daughter just did.”  The two become the first mother-daughter duo to swim the Lake Ontario crossing.