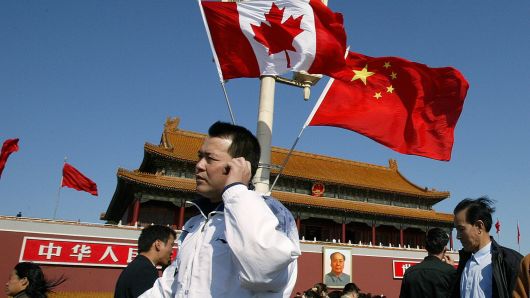 There was a flag raising this morning at City Hall for the 70th anniversary of the People’s Republic of China.

Mayor John Tory will not be attending. In fact, several local groups and citizens will boycott the flag raising over Canada-China tensions. With the world watching the ongoing chaos in Hong Kong, there’s also the matter of China’s imprisonment of two Canadian men.

Michael Kovrig, a former diplomat, and businessman Michael Spavor are being detained by the Chinese on suspicion of spying; their arrests are viewed as retaliation for Canada’s part in the arrest last year of Huawei executive Meng Wanzhou, who was picked up in Vancouver at the behest of the American government.

In a statement, Don Peat, Executive Director Of Communications and Strategic Issues Management in the mayor’s office, says it is not the city raising the flag — it is a courtesy pole where countries officially recognized by Global Affairs Canada are allowed to raise national flags.