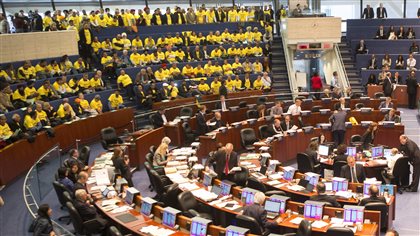 An emergency meeting of Toronto City Council took place on Thursday following yesterday’s re-introduction of controversial legislation at Queens Park which reduces the size of city council by nearly half. The bill, now called the Efficient Local Government Act, passed first reading by Doug Ford’s majority PC’s, who invoked the notwithstanding clause in the Canadian charter of rights and freedoms. The deadline for those interested in running for city council in October will be extended two days after the bill receives royal assent ,so likely October 1st. Libby breaks it all down with Shelley Carroll, who is running for City Councillor in Ward 31, then it’s over to NDP MPP Peter Tabuns followed by City Councillor Sarah Doucette,who won’t be running for re-election and political strategist Gerry Nicholls weighs in also with City Councillor Joe Mihevc fresh from the city council meeting.