Toronto Police say a total of nine charges were laid over the past two days against the owner of Adamson Barbecue after the restaurant was forced to close both Monday and Tuesday for opening in defiance of  lock down orders. 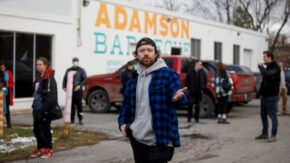 “There were charges for operating a business without a licence, there were Toronto public health charges with regards to breaching the regulation of indoor dining,” said Police Superintendent Dominique Sinopoli.

Police also charged the owner for the illegal gathering but nobody in the crowd was charged.

Fines for violating the province’s emergency orders could face fines from $750 to $100,000

Premier Doug Ford is taking a different tone today when he was asked about restaurant in the Premier’s riding of Etobicoke.

“Irresponsible and ridiculous and then I find out he’s doing so well online and take out orders, he opened a second location but he wants to defy the guidelines from the chief medical officer,” said Ford.