75 YEARS SINCE THE NUREMBERG TRIALS BEGAN

It was 75 years ago today, the Nuremberg Trials opened in Germany 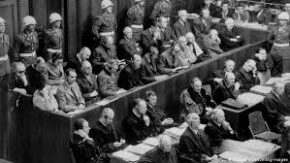 The trials held to account the Nazi’s responsible for the murders of 12,000,000 people during World War Two.

The international tribunal found all but three of the defendants guilty.

Twelve were sentenced to death, the rest were given prison sentences ranging from 10 years to life. Those condemned were executed by hanging on October 16th, 1946.