Toronto’s mayor is urging the governing Progressive Conservatives at Queen’s Park to do more and put more restrictions in place to curb the spread of COVID-19. 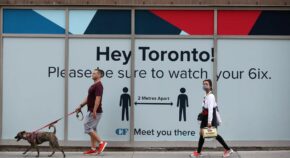 John Tory explained Wednesday morning that advice from Toronto’s medical officer of health has been submitted, but he’s not inclined to wait too long to hear back because of soaring positivity rates in some areas of the city.
“We’ve seen for example the report out talking about the 30 neighbourhoods in the GTA, of which 15 are in Toronto where they have a high positivity rate, including in Scarborough and in northwest Toronto, so I will just say there will be a point in time where the city has to take a look at what it can do on its own if the province makes a different choice, but for me, I think the evidence is fairly clear that we need to do more in order to stop a situation from getting worse that is already very very disconcerting.”
In addition, we are learning the Scarborough Health Network has more COVID-19 patients than any other GTA hospital, and roughly 14-percent of swabs at its testing centres have been coming back positive as reported in Wednesday’s Toronto Star.