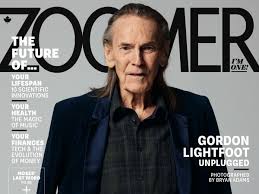 The man Canadian music legend Robbie Robertson refers to as a “National Treasure, was born in Orillia in 1938 and has lived in Toronto for most of his adult life.
He’s been nominated for four Grammy’s, is a multi Juno Award winner and a Companion of the Order of Canada.
His songs have been covered by a literal whose who of the music world including Elvis Presley, Neil Young, Bob Dylan, Judy Collins, and Eric Clapton.
Happy birthday Gord.